Facebook is debuting its free online dating service in the U.S., opening a war against long-established rivals like Match.com in helping users find romance.

The social network introduced Facebook Dating domestically on Thursday after months of testing it in 19 other countries, including Argentina, Columbia, Mexico, Peru, Singapore, Thailand and Vietnam. Facebook expects to roll out Facebook Dating to Europe by early next year.

“Facebook dating is a place to find love through the things you like, and what we mean by that is we’re trying to start meaningful relationships,” says Nathan Sharp, the product manager for Facebook Dating.

To succeed, Facebook must make inroads in a field that is already crowded with rivals. It must also overcome user apprehension after a series of privacy problems—including a record-setting $5 billion settlement with the Federal Trade Commission—and revelations about its service being used to spread misinformation.

Facebook users 18 years or older who want to use the new dating service must have the latest version of the Facebook app downloaded to their smartphones. During the set-up process, people must create a dating profile separate from their main Facebook profile and enter basic information like height, religion, job title, education, and the answers to questions such as “What’s your perfect day?” Users also have the option of importing information, including their name and age, along with photos from their Facebook profiles and Instagram accounts.

For now, Facebook lets singles express interest in up to 100 matches a day by tapping on a heart button on someone’s dating profile or commenting on that person’s photo. If the object of affection reciprocates with a mutual button tap or responds to that photo comment, they can strike up a conversation in Facebook Dating’s messaging section.

A new optional feature for the U.S. launch, called Secret Crush, lets users pick up to nine Facebook Friends or Instagram followers to potentially match up with. If the people they choose are also on Facebook Dating, the selected few will be notified that someone else on the service has a “crush” on them. (If their crush isn’t on the service, they aren’t notified at all.) 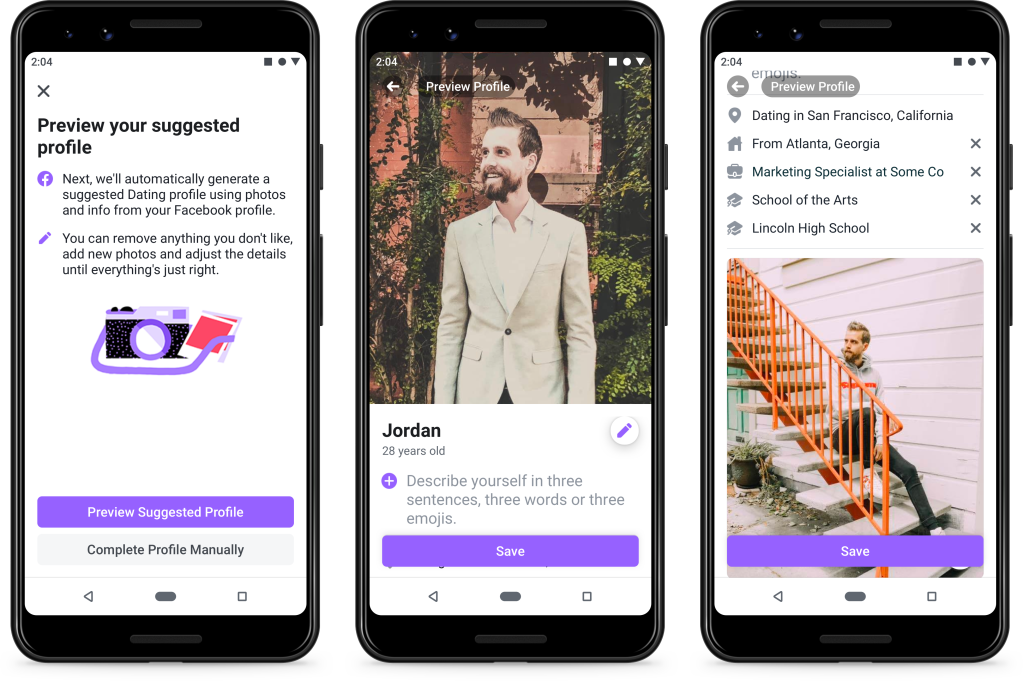 For Facebook, the reason behind entering the dating app scene is simple. It says over 200 million users list themselves as “single.” If even a fraction of those users also join Facebook Dating, they’ll spend more time on Facebook. However, that’s won’t immediately translate into money. The service is free, and, initially, at least, will be without ads.

The biggest obstacle to Facebook Dating succeeding in the U.S. is Facebook itself. The company continues to deal with a string of privacy disasters, which could make users uncomfortable about handing over sensitive information like their dating preferences.

Facebook was clearly aware about these fears while developing its dating service and testing it in different countries before bringing it stateside. It’s why dating profiles are separate from main profiles; why Facebook Dating’s chat feature is separate from Facebook Messenger; and why users can choose whether they want their matches to be friends of friends or outside their friend circles entirely.

A new safety feature for the U.S. launch of Facebook Dating also lets users choose to share details about their upcoming dates with users on Messenger, including their real-time location. That way, if the date goes awry for some reason, the user’s friends know where they are.

How Facebook Dating fares in the U.S. could have major effects on its rivals. Shares of Match Group, which owns dating services including Tinder, Match, OKCupid, Hinge, and Plenty of Fish, plunged nearly 10% the same day Facebook unveiled Facebook Dating in May 2018. (The stock has since recovered.)

Previously, Match Group CEO Mandy Ginsberg shrugged off Facebook Dating in media interviews as a welcome addition to the dating app scene. However, Ginsberg also pointed out the uncomfortable timing of the announcement, given Facebook’s privacy snafus.

In a blog post last year, Coffee Meets Bagel said the number of requests by users to log in—besides using Facebook—increased 378% following the Cambridge Analytica scandal, in which the information of up to 87 million Facebook users was shared without their consent. Many Coffee Meets Bagel users no longer wanted to use Facebook to sign into Coffee Meets Bagel or they had deleted their Facebook accounts entirely.